Last September, we had the opportunity to hear Qristina and Quinn Bachand during their fabulous appearance at the Celtic Classic in Bethlehem, PA.  We were thus primed with excitement to hear the solo work Qristina was recording, and when the album arrived, we were definitely not disappointed.  “Linger,” Qristina’s first solo recording, is a feast of unaccompanied fiddle tunes performed beautifully.

Every tune on the album is a delight; for me, highlights include “Hogeyed Foxhunter” (two reels played in a lower tuning from standard, which really brings out the richness of the fiddle), “Grondeuse” (a sprightly French-Canadian tune), and “Cap’s Lament,” Qristina’s tribute to her loyal canine friend Cap.

We’re thrilled that Qristina took the time to talk to us about the album before its official release in February.  (You can preorder the album now, though!)

In the liner notes for the album, you mention that you had to overcome your fear of recording a solo, unaccompanied fiddle project.  What was especially intimidating about the prospect of doing this?  And now that it’s done, how do you feel about working solo?

Having worked for such a long time with Quinn, who is an unbelievably talented, stripping the chords away and leaving the fiddle exposed was daunting. My music is extremely personal. It’s as if I’m baring everything for the listener or the audience, and hoping they’ll connect with that. It’s me and the audience – especially given the way the recording was captured, in this ‘minimal’ sort of way with only a stereo pair of AKGs.

You recently finished a master’s degree in traditional Irish music performance – how have your studies impacted how you perform, how you approach music, etc.?

Being in Ireland and doing this course was the push I needed to develop my solo voice, and I doubt this album would have happened otherwise. I did all my assessment performances solo; arranging music that would eventually end up of this recording.

While was in Ireland I was also faced with my first physical obstacle: tendinitis. The doctor told me I couldn’t play for 3 months, which felt like an eternity in the middle of a music degree. Eventually I even had to hide my instruments in the closet because seeing them was too hard. As difficult as this time was, I learnt so much about my physical health (posture, tension and stress) and had time to assess my priorities and delve deep into the motivation behind my music. Solo fiddle is hardly lucrative; I realized how important it is to be satisfied and enriched by what I’m doing and to always play from the heart.

I admit to semi-ignorance in that, while I’m fully aware of alternate tunings for guitar, I hadn’t really thought of it in the context of violin.  (Partly because I’ve run screaming every time I’ve tried to tune a violin.)  You perform “Hogeyed Foxhunter,” for example, with a tuning of F#C#F#C#.  How frequently do you use alternate tunings and how challenging is it to use them live?  And how do you feel changing tunings impacts the sound you get out of your instrument?

Lately I’ve been playing in cross-tuning more than I’ve been playing in standard tuning. My current favourite of these tunings is GDGD; and a bunch of variations of that (F#C#F#C#, for example – which is a semi-tone down). Changing the tuning of the instrument changes it’s character and allows you to tap into new sounds and textures that would be impossible to achieve otherwise. I find it very inspirational. I particularly like tuning down, which gives the fiddle a richer, warmer sound; almost reminiscent of the viola. 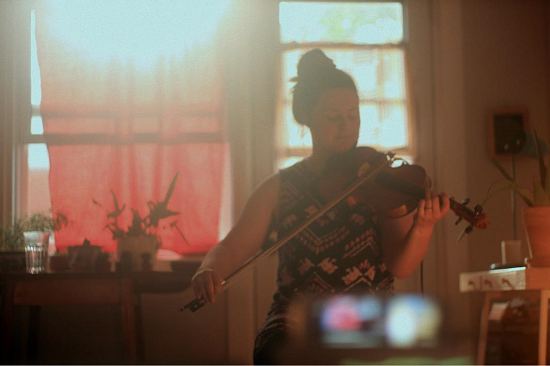 Several of the pieces on the album involve plucking rather than bowing – I think most classical violin students learn pizzicato, of course, but how common is it in traditional fiddle playing?

You might say the plucking tune were a happy accident! The earliest of these compositions was “Diamond Ring”… I wrote it while I was visiting a friend in Cork over Christmas break; but it was late, so when I made the voice memo to remember how it went I plucked it out very quietly. I then completely forgot about that tune until I went back to listen through my voice memos whilst preparing for the recording.

Guitarists always get to talk about their gear, so I think it’s only fair to ask violinists too: can you tell us about your violin (or violins, if you’re using more than one)?  Maker, strings, etc.?

I have two violins at the moment. I’ve had my ‘main’ fiddle since I graduated to a full-size instrument at around age twelve. The other was gifted to me by a couple at a B&B in Tennessee. It had been in their attic since before they purchased the house, and was in pretty rough shape. Luckily my dad was able to fix it up and it sounds awesome!

In addition to your fabulous playing, you also contributed the artwork.  When I talked to you in Bethlehem earlier this fall, you were especially pleased with how the hard copy of the project was turning out… can you talk a bit about your art and how it was inspired by the music (or vice versa)?

As this was my debut solo album, I wanted every aspect of it to be special. I incorporated my artwork throughout the physical CDs, and opted for a foldout art poster / liner notes insert.

The album photos were taken by my partner Paddy Mulcahy, who also engineered and mixed ‘Linger.’ He was an essential part of the project and it was really fun to work on it together and connect on this deeper, musical level. Paddy and I also have some new duo material in the works… Stay tuned!

I find it hard to listen to “Cap’s Lament” – not because it’s anything other than beautiful, but because we ourselves have lost two pets this year and you evoke the loss so well in the track.  How difficult is it to play pieces like this one, rooted as they are in painful experiences?

Thank you! I’m so happy the emotion comes across.

I was away in Ireland when our family dog – beautiful Border Collie ‘Cap’ – passed away, and I recorded the album of my first trip back home since. My parents had a box with some of his fur clippings, his collar and a mold of his paw-print and I brought this down into the studio with me. The piece is very emotional – it was hard to write and it’s always hard to play, but it was especially hard that day. Hearing how the track came together with the field recordings of his collar and us playing ball, though… I’m happy I could honor and preserve the memory of my lifelong friend.

What plans, if any, do you have for touring the new project?

I just got back from Ireland, where I was teaching at the Irish World Academy and doing a few shows.

I’m mostly gearing up for the release of ‘Linger’ in early 2018! Trying to get the word out there and raise awareness about the project and the music.