It's a Commonwealth Connection - Ali Neil, British singer/songwriter, has a new solo EP out (his debut). Check out Richard's thoughts about it.

When I come in of an evening, all I really want to do is kick my shoes off, sit back on the settee and unwind with some relaxing, slightly melancholic music playing in the background, and fall inside myself, drifting with my own thoughts. Ali Neil’s debut five track EP, “Land Before Us,” allows me that privilege; ride out the day slowly unwinding from the ache flowing with whatever comes to mind. Maybe it’s just a by-product of his recent move from the UK capital of London to the relative remoteness of his new dwelling on the East Sussex coast, but whatever it is provides us with a very easy record to listen to.

Ali provides an insight: “For the first time, after years of getting sick with detail I tried to worry less, well about everything really.”  If this album sounds unrushed, then again, this comes as no coincidence. “I started this solo project prior to the first Covid lock-down with a couple of single releases, so when lock-down hit I had all the time in the world to write new songs and throw away old ones which was just as important,” he shares. “I was demoing these tracks at home, hence the introduction of the synth elements as that was one of the instruments closest to hand. I had to work with what was available. I managed to snatch the time for recording between lock-downs 1 and 2 of 2020, where I worked with my producer friend Olly Betts, and we worked quickly and joyously on bringing the songs to life.”

The overall relaxed tone is set from the get go with the sublime “A Place Called Winter,” and doesn’t really slip far off that groove, all of which is perfectly fine as there’s enough differential in the songs to avoid stagnation without straying beyond the karma these songs illicit. It’s obviously also a very well thought through record, a female counter-balance is sporadically added by the delightful Say Anise, which gives little sympathetic lifts when needed. Equally sympathetic touches like the synth strings on tracks like “A New York,” or almost accordion sound induced on “Edge Of Reason” are perfectly judged and executed.

“Damn Life” is about as raucous as it gets, but although a sprightly drum beats out its rhythm, it’s not going to garnish a mosh pit. The whole sonic experience comes to an all-too-early end with the gorgeous “Heart of a Man,” with a beautiful understated guitar solo that you simply want to extend perhaps even until the end of time itself. I’d love nothing more than this EP to be the first side of an up-and-coming full-length album, so I can simply flip it over and experience another side of more or less the same.

A self-professed fan of Canadian alt-country music, Ali’s own creativity has been partly influenced by the likes of Andy Shauf, Kacy & Clayton, and The Deep Dark Woods, and equally important in terms of what he wanted to do with his music, and being comfortable with being understated and not afraid to be mournful or melancholic. There’s another notable link to Canada, with Canadian videographer Landon Johnson (Little Jack Films) recording the music video for “Heart Of Man” at Mount Nebo in Saskatchewan. “He was housesitting for a week, loved the solitude of the place, and thought it really reflected the track,” Ali shares. “I haven’t released the video yet but thought it might be a cool idea to sync the release up with your review.”  The pleasure is all ours, Ali. 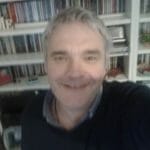