You would think that after nearly two years of almost daily music blogging, new music would no longer be a cause for excitement in our house, but when projects like “Blued Dharma,” the recent duo project from pianist Adrean Farrugia and saxophonist Joel Frahm, arrive, it’s a happy day.  This delightful album explores the ‘cosmic order’ (from one of Adrean’s comments in the interview that follows below) of their musical partnership, and it’s a terrific ride, start to finish.

The album features five original compositions from Adrean and three interpretations of well-known standards, one of “Nobody Else But Me” (Kern/Hammerstein) and two (!) of Roy Noble’s “Cherokee”… but lest you think that including two versions of the same piece invites repetition, listen to both and marvel at the ways that gifted musicians like Adrean and Joel can interpret the same piece as nearly polar opposites.

If you’re a Doctor Who fan, you’ll likely appreciate the duo’s tribute to Murray Gold (the show’s long-time composer, who sadly was recently dropped from the show), a lovely and reflective piece.  “Cool Beans” is one of many highlights of the album for me with its blues-tinged beat that gradually ramps up into a bit of ferocity mid-piece.

“Blued Dharma” is an excellent example of the great jazz that’s happening in Canada.  Adrean and Joel are making plans to tour next year; if they come to a city near you, I highly encourage you to go hear them – you’ll definitely hear some fantastic musicianship.

We’re so pleased that Adrean Farrugia took the time to speak with us about “Blued Dharma.”

I’m often curious about album titles – what inspired you to name this particular project “Blued Dharma”?

Dharma is the principle of cosmic order. I feel that music often tries to create some sort of order or meaning out of the chaos our lives exist inside of.

‘Blued’ (like ‘the Blues’) acknowledges the inherent suffering that all humans experience on their life path—this music tries to capture both the joy and pain that life brings us.

ALSO, the title track is largely inspired by one of my favourite musicians, Brad Mehldau, and ‘Blued Dharma’ is an anagram of his name:)

I think you and Joel have worked together in other contexts (Turboprop, for example) – how did this specific collaboration come about?

Joel and I have always had a strong simpatico musically.

One day on tour with Ernesto Cervini’s Turboprop we played a couple of duo tunes after a soundcheck and afterward Joel suggested that we make a duo record at some point. I was very excited at this prospect and two years later….here we are! 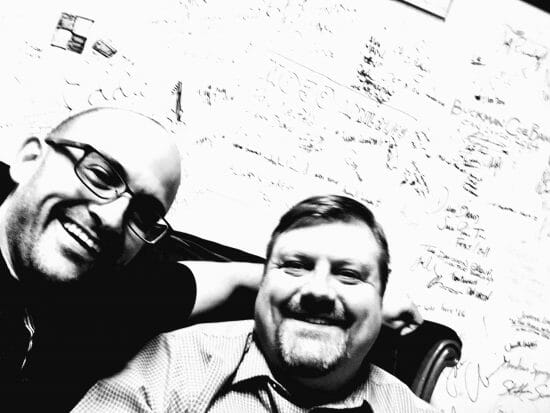 You do a significant amount of work as a sideman and session player, and you also teach (at Mohawk College); how challenging is it to find space and time to write and record your own compositions?

Very challenging. It takes intention, time and money to make it happen. I think the motivator is having the belief that music is actually something that the world needs, and that music has the power to make a positive difference in the world for others.

Is “For Murray Gold” for the Murray Gold of Doctor Who fame, or a different Murray Gold?  What inspired this particular track?

I love the Doctor Who series and in particular, the musical contributions of British composer Murray Gold. Episode 233 ‘The Rings of Akhaten’ has a beautiful ‘lullaby’ sang by a young princess to keep a large sun planet ‘asleep’ so as not to engulf her tiny home world in flames. It’s a very simple and beautiful piece and I wrote a song that borrows a couple themes loosely—so I thought it would be appropriate to dedicate the composition to Murray Gold. And yes, I’m a big nerd ????

(Here’s a YouTube clip of Murray Gold’s ‘The Long Song.’)

Why two versions of “Cherokee”?

We could have done 15 versions.

One of the unique aspects of jazz/improvised music is in how musicians might interpret vastly different versions of a song from performance to performance. Miles Davis, for instance, played songs like Autumn Leaves for 30 years across different bands and yet managed to keep it sounding fresh and new every time he played it.

I wanted to capture the spirit of ‘in the moment’ improvisation by featuring two uniquely different tales of the same song on the album.

I know you had a release event for the album; any plans to perform this material live again soon?

Yes. I’ll be working on putting together some tour dates for Joel and I in 2019. Canada first, then hopefully Europe.