It might seem quite odd indeed to admit that the first time I heard trumpeter John Pittman’s debut album, “Kinship,” was under water.  I was trying out gear for listening to music while swimming, and when this album came in, it was a fiery kickstarter.  (Literally.)  Regular readers of this blog might recognize John from our previous conversation with him about Heavyweights Brass Band’s album earlier this year – this chat, however, is about his own project.  Teaming with Shirantha Beddage (baritone saxophone), Jeff McLeod (piano), Mike Downes (bass), and Curtis Nowosad (drums), John has created an album that’s by turns funky, fiery, and clever.  (And, for those so inclined, wonderfully inspiring music for a long swim.)

From the start, this album grabs your attention.  “Ties That Bind” has a powerful, slightly dissonant opening that launches the group into a mad rush of delightful sound.  “For Siobhan” (which opens with a terrific groove from Mike Downes) is an absolute funky delight, while “Homio-Stasis” includes a fun dialogue between piano and horns.  “Moray Crossing” reminds me just a bit of Vince Guaraldi’s iconic music for “Peanuts.”

“Reminiscing” and “Home” offer rare chances for the musicians to slow down a bit – “Reminiscing” is perfectly named, while “Home” has the slow kind of groove that first drew me to jazz as a youngster hearing it live for the first time in a hotel bar in Kansas City.

This is a thoroughly self-assured debut from John Pittman as bandleader and composer – he shines not only in these roles but also as soloist throughout.  I’m keeping my eye on his schedule for the opportunity to hear him live (check his website for upcoming dates) and I suggest you do likewise.

“Kinship” is your first release as bandleader, I believe… how has this experience differed for you from being an ensemble player in such groups as Heavyweights Brass Band?

The biggest difference is just the music itself. The Heavyweights Brass Band is a very collaborative group where everyone has a voice, so taking on the bandleader role here doesn’t feel very different.

The press release talks about this project as an exploration of relationship – how have you done that with this album, and what does “kinship” mean to you?

I wanted this album to touch on all the influences that have led to where I am as an artist today. Obviously, family is a huge party of that, but I also wanted to touch on the broader idea of kinship; the feeling of kinship. The sense of connection you have when you find common ground with another person. This idea is a theme in the music, but also in how the band was put together. 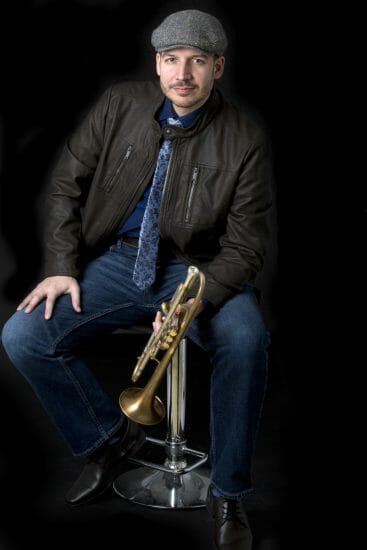 I’m always curious about how the process of composition works for jazz musicians in particular, from writing those first few notes to finishing up the recording… can you talk a bit about how that process has worked for you on this album?

The composition process on this album is a bit hard to sum up. “Reminiscing” was composed around 2000 or 2001 and the arrangement of “As” was done in the week before we recorded. All the pieces come from different times in my development as a musician and I had very different approaches at times. I generally like to think of the character or feeling I’m trying to capture and then listen to a lot of music that gives me that vibe. Then I try to mold an idea into something new without losing the essence of that feeling.

You work with some pretty stellar musicians on this album; can you tell us a bit about what each of them brought to the table?

Shirantha, Jeff, Mike and Curtis are all simply phenomenal musicians that came into the studio devoid of ego and worked patiently to make sure we got the most out of each piece. They have huge ears and no preconceptions so the music just flowed where it needed to go. Also, they are all band leaders and composers, so they provided a lot of support and insight throughout the session days. I asked them to be involved with the project because I feel a sense of kinship with all of them. Shirantha, Jeff and I are all Canadians who attended the Eastman School of Music. Jeff and I also taught together for two years. Mike, Curtis and I all attended the same high school in Winnipeg. I grew up admiring and inspired by Mike’s work (still am). Curtis is a former student of mine that more than outgrew those early lessons and is teaching right back! I have so much respect for the amazing work he’s doing as a drummer, composer and band leader.

In addition to your own compositions, you include a great reworking of Stevie Wonder’s “As” – if I recall correctly, a Stevie Wonder piece also appeared on HBB’s “This City.” What is it about this tune specifically and Stevie Wonder in general?

“As” is special to me because it was a song that really captures how I feel about my wife and I sang it for her at our wedding. I wasn’t planning to record it, but when Siobhan suggested it, I got to thinking about what it would sound like in the context of the quintet and we landed on a fun reworking of the tune, mostly in 7, with a New Orleans second line groove. Stevie is just such a masterful song writer, performer and poet. He has a rich library of tunes to explore; modern day standards.

I know the album release event took place in August – will there be other opportunities for listeners to hear this material live?

The release event on August 30th was a wonderful night and celebration! The whole thing was documented and I’m looking forward to sharing some video from the show. The quintet will be showcasing the music of Kinship at The Rex Hotel in Toronto every Wednesday in October starting at 6:30 pm.

Listen to “Kinship” on Spotify.