With her new EP, Kristi Lane Sinclair explores a vast range of sounds, drawing not only from her Haida/Cree ancestry but also from her love of grunge and classical music.  “The Ability to Judge Distance,” which Sinclair also produced, is a searing, powerful set of songs that delve into issues as disparate as politics, social justice, and relationships.

The album begins with a fiery start – literally, as “Fire in Santa Fe” probes the embers stoked in part by the 2016 US presidential election and the Standing Rock pipeline protests.  “Desire,” with its soaring violin solos, is a gorgeous exploration of the narrow lines between desire and lies, giving and taking.  “Starlite & Dust,” perhaps the highlight of the album for me, walks the balance between a hot flame and a slow burn with perfection, resulting in a performance of controlled fury and passion. “Time” begins with a slight twang that could almost be country, while “Guido” (the album’s closing track) finishes the album with a blazing tribute to young indigenous people who are unsure both of their present and their future. 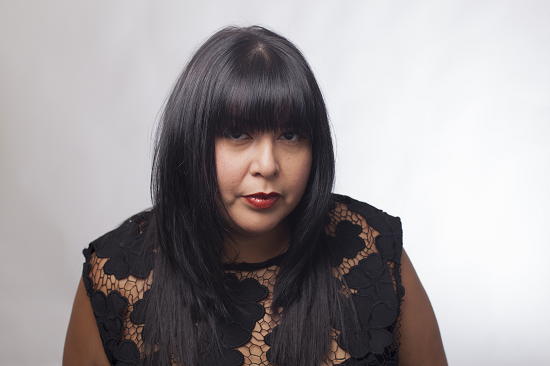 If this excellent EP is any indication of the trajectory on which Kristi Lane Sinclair’s career is traveling, she has many bright things still ahead of her.  I look forward to hearing more of her work in coming years.

We’re delighted that Kristi took a few minutes to talk with us about her album.

According to the press materials, “Fire in Santa Fe” was “jointly inspired by the fear and rage generated by the 2016 U.S. presidential election and the Standing Rock pipeline protest.” One line that caught my attention was “you can’t have it all if you set it all on fire” – an analogy that I find a really apt (writing from this side of the US/Canada) description of our current political situation down here.  (And recent events with the Standing Rock pipeline have also proven what a mistake that project has been.)  With a bit of time and distance from writing this song, how do you see things now – have they gotten better, worse, or?

Not much has changed.  It is so moving seeing what’s happening on a grass roots level…I mean seeing what 5 high school students organizing the biggest march ever.    What brought them to that point is terrifying and the fact that Trump golfed instead of attending is infuriating.  Fire is so valid.

As for Canada I feel more sad and angry than ever before. We need justice for Tina Fontaine and Colten Boushie. I think current politics is telling people what’s ok and in Canada some think its ok to kill Indigenous people right now, it’s ok to be racist.   Gerald Stanely would like to write a book about it.

I’m curious about the violin solos, especially on “Desire” – am I correct that you’re using some effects? Any clues about how you achieve that sound?

I would have to follow up with Praise Lam about her violin.  It’s electric and badass just like her, that’s mostly what I know.

Your influences include not only your Haida/Cree heritage, but also grunge and classical music – I’m really intrigued by what connections/juxtapositions you see between those two genres?

I don’t really think about this too hard.  I feel like my life have afforded me these juxtapositions and they are not strange to me, it’s just how it flows.  If you follow me around on socials, you’ll kind of learn that I can be writing for choir in the afternoon, go to noise show at night and then wake up on the shores of Haida Gwaii.  It’s really equal parts and if it wasn’t, I probably would go crazy.   I think sounds just come out in the wash.

You chose to produce this album yourself – you mentioned that it was a sort of test for yourself. Do you feel you passed?  🙂  And would you self-produce again?

I would produce myself again in a second but I would also snatch someone up if they were Terra Lightfoot. Jk, hi Terra.  I’ve never asked her btw.

Over the last several months, we’ve had conversations with a number of musicians about the challenges independent musicians face in general (copyright; labor mobility; equitable compensation for digital content, just to name a few) and the challenges experienced by female musicians specifically. As a person of First Nations heritage, does that add a third layer to what is already a considerable slate of issues facing musicians?  For yourself, what do you believe needs to change in the music industry?

It’s a hard question because it’s treated a bit like the “Indigenous curse”.  When I write though, how lucky am I to have this wealth to draw from and this culture to back me?  Hella lucky.  I would love to get more radio play but it comes down to an individual or a radio stations view point.  Don’t play me just because I’m Indigenous, but then again, Indigenous content is important. If you don’t think it’s cool enough, I hope to hell it isn’t because of my ancestry.  At the end of the day, I wanna make tunes that will transcend all the bullshit.  Good music does that.

What touring plans do you have for the new material?

Well I hope to get on the road this summer with a full fall tour but will have to wait and see to where I end up this round.

Listen to “The Ability to Judge Distance” on Spotify.