I first discovered the awesome uniqueness that is Petunia and the Vipers’ music when exploring last year’s album releases from British Columbia.  Their last album, “Dead Bird on the Highway,” was a wickedly cool mix of horns, pedal steel, and yodeling, and it caught my attention from the first track.  So I was terrifically thrilled to see a new release from them last month… and if anything, “Lonesome Heavy and Lonesome” is an even better album than “Dead Bird.”

The album begins with the coolly reflective “We Did Not See the Light of Day,” with a sound that reminds me of some of the most suspenseful moments from old Westerns – those parts where you weren’t sure that the guy in the black hat wasn’t going to win the day.  With the next song, the mood shifts drastically to a jaunty New Orleans-style beat with a generous helping of Petunia’s trademark yodel.  (What, you don’t think yodeling is cool?  Give this album a listen and I bet you’ll change your mind.)

The band successfully and effortlessly shifts through a variety of styles – “Urban Landscape” is a hard-hitting tune with surprisingly dark lyrics, while “Blindly Wander” (which follows it) is a slow, dramatic ode to the wide-open.  Although the variety might be jarring on some albums, here the group manages to create a cohesive sound to the whole project.  The result is a highly enjoyable listen, all the way through.

We’re so pleased that Petunia took the time to answer a few questions about the album.

We first became aware of your music with “Dead Bird on the Highway” as one of our favorite albums to come out of BC last year – after that project, where did you want to go with this one, musically?

No idea, mostly accidental by design as usual. Except perhaps I had a hope to write and record more original material on this album. That hope came true.

Your particular style of music is somewhat resistant to easy categorization – some country, some blues, a bit of jazz thrown in.  How would you describe it?

I generally try and let others describe it and use their quotes for the reasons you mentioned. “Hank Williams on acid”? (…on our website however, there IS a section in the bio that’s titled, “Insider’s point of view” – I recently wrote it if you want to grab quotes from there?)

I try and stay away from using the “sub genre” titles without being more specific. That’s a trap. Though I understand that people want labels in order to be able to consume a product, our product even. How about, “Our music has distinct echoes of distinct past standard industry created sub genres and springboards off of these into the future to form a new kind of sound”…I can’t think of a band that sounds like ours. Not that that’s a good thing necessarily.

One of my favorite songs from the album is “Blindly Wander” – it’s such a lovely, slow, anthemic piece.  Was there a specific experience that inspired it?

That song is a good example of what we’re talking about in the last question, it defies genre-fication right?

I think of the prairies first when I think of “Blindly Wander” and especially singing some parts of it. Lots of landscapes (perhaps all?) across North America that I’ve seen, been on, and witnessed, often by standing on the side of the road with my thumb out, sometimes for hours or even days in one spot, come to mind in some ‘body memory’ or other I suppose?  Lots of “camping out”, willy nilly here and there have also delivered this song to me. Some reading too, but mostly hanging out in lands. 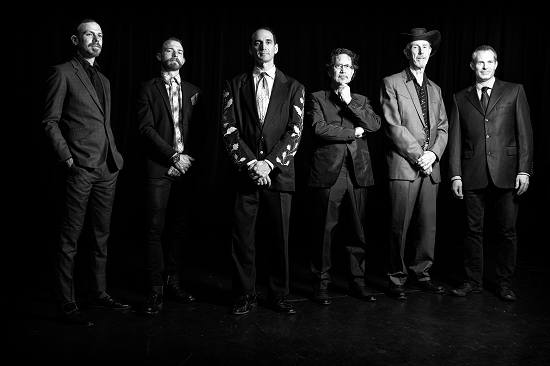 In a previous interview, you told the interviewer about learning your craft via endless traveling and busking.  As your career has changed, how has your approach to continuing to evolve your musicianship changed?  (or has it?)

There’s still lots of endless traveling in my life. Actually I’m covering way more ground these days in my own vehicle as opposed to using my thumb or other part time means of travel.  Less excitement and adventure though, it’s true. HO hum…

I’m still standing around playing music to people. Except now it’s on a stage. So that part remains the same. The same connection and interchange of energy and even expression between myself and people listening, watching and being there. Less accidental choice of songs, though the songs that our band play change every night and are rarely played in the same way night after night. Keeps music fresh to remain open to new possibilities I guess.  Certainly more fun for any song to be less preordained before it’s played.

Many musicians struggle because they try too hard to sound like others instead of finding their own voice; your music is extremely unique and, it seems, reflective of the many musical inspirations you’ve found.  What advice would you give to aspiring musicians about learning to be themselves in their music?

Before I answer that I wish to point out that (and it’s important to remember here)…that imitation is the highest form of flattery. And that to do well what others have done before us is no small feat. I imitated tons when I started. So did Bob Dylan, so did Hank Williams, so did Jimmie Rodgers, so did…you name the star they all all started by imitation in some form or another. It’s called learning your craft. And I feel like it’s important.

Having said that, it’s also important not to pay too much attention to the music industry if you want your own sound. It’s a long story but it’s been true for me anyways in my area of music making.

Accept what people criticize you for, it’s your own (Jean Cocteau said that). Don’t be too hungry to sign a record deal, you can release records these days without doing that. DIY in general if you can. I bet it pays off in the long run.

You have a number of gigs coming up, both solo and with the Vipers – across Canada and parts of the US, and even Colombia.  What are you looking forward to most with taking this new material on the road?

Showing new songs, and new sides of the experience to people. Breaking into the USA with the band for the first time, beyond the rockies has been very exciting! We’ve played a brief but super successful stint across the US midwest landing Tennessee and hope to return to the USA southeast for a longer more in depth run this March. We also played eastern Canada briefly for the first time as a band which was really really well received.