With the release of his first solo album, Joey Niceforo has stepped onto the international musical stage in a big way – most artists, after all, don’t get the chance to record their first project at Abbey Road Studios as he has done.  His singing certainly matches his surroundings, as he has delivered an excellent debut with “Priceless” that demonstrates his versatility and talent.

For those of you unfamiliar with him, Joey made his professional debut in 2005 when he joined the original Canadian Tenors. He then formed his own classical crossover ensemble Destino in 2006 and toured with them internationally, including performances at the Beijing and Vancouver Olympics, Carnegie Hall in New York City, the Miss America Pageant in Las Vegas and a national tour with the Rankin Family.

As a ‘New Classic’ solo artist, he has performed a number of concerts in Canada, the U.S., across Italy, the Czech Republic and always enjoys performing in his hometown of Sudbury. He has been featured on NBC singing the American National Anthem for the Columbus Day parade in New York and on an ABC made for TV movie produced by Britney Spears.

As I mention below in the interview, the part of me still rooted in the 1970s was immediately drawn to Joey’s covers of “Solitaire” (The Carpenters) and “Winner Takes It All” (ABBA).  He gives both of these songs a unique, inimitable twist; for those of you old enough to remember the originals, “Solitaire” will likely be immediately recognizable but his interpretation of “Winner Takes It All” is unique enough that it may take you a minute to place it, the first time through.

We are so pleased that Joey took some time to answer some questions about his new project.

I suspect most musicians dream of recording at Abbey Road – how was the experience for you?

It was probably the best musical experience of my life. I remember being so nervous leading up to the recording and I literally did not sleep at all the night before. Knowing the amazing artists who had previously recorded there, over 80 incredible orchestra members playing for me, having GRAMMY Award-winning producers, musical engineers and everyone else there for me felt like a HUGE amount of pressure. There’s always these little voices in your head telling you you’re not good enough and that shouldn’t be there. During the recording of the first song, we did several takes but I was still nervous, and I couldn’t calm my nerves. I was in a booth off to the side watching the amazing orchestra play. During the next take the conductor thought it would be fun to do the first take of the second song “Winner Takes It All”, which is what you see in the music video, live in the room with the orchestra. Being in that room, and feeling that orchestra go right through me just made me appreciate the moment. I had no choice but to let go and have fun. We had two full days in the studio and I still get filled with emotion thinking about how lucky I am to have recorded my first album there. 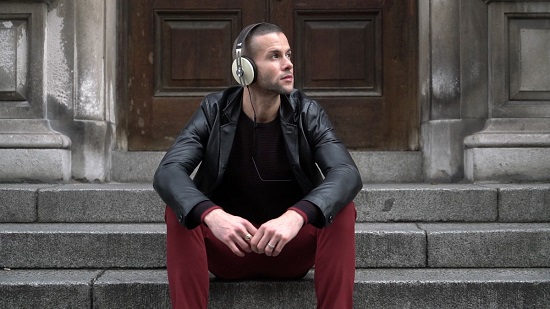 Can you talk a bit about “Note to God” in particular – how did this song come to you? Beyond the obvious message of the lyrics, what do you hope your listeners take away from it?

We floated around the idea of possibly getting a song from Diane Warren (which would be INCREDIBLE) so John Jones (one of the producers) had reached out to her office to see if it would be possible to do so. I was THRILLED when JJ (as we call him) called me and said they had some song suggestions and that we could go to her offices in LA and have a listen, also meet her. She was AMAZING! So nice, down to earth and interested in the project. A dream come true for me for sure! We have three of her songs on the album.

“Note To God” was one of the three that I originally didn’t think I could sing. The demo we received from Diane Warren’s office had a brilliant singer on it performing this piece with these fabulous licks and riffs which I can admit that I can’t do at ALL. But I worked through it with JJ and we decided to really just sing it simply because the melody and lyrics that Diane created were perfect in itself, so I could sing it the only way I knew how.

I really hope that people can take comfort from the song and the words. I’m an avid ‘facebooker’ and I see a division like never before. I try not to give my opinion on politics or current events on social media because, for the most part, I think people turn to music for distraction and hope. No matter where your politics lie, I think this song can help people see the desire and possibility for us to live in a better world. A world where we could find a greater love within us all, a love so deep that it could give us the hope and strength to transcend hate. This is the world I want to live in, this is the world we can build together.

You include a reading of ABBA’s “Winner Takes It All” that’s a quieter, more reflective interpretation of the song than folks might expect (especially those of us old of enough to remember the original). What inspired you to interpret the song as more of a ballad?

I grew up listening to ABBA (they are probably my favourite bands/songwriters from that era). I was watching Mamma Mia on TV one evening, and Meryl Streep’s version of “Winner Takes It All blew my mind. It was more than just a song or a cover… it was a story… a dramatic interpretation. When we did the first demo of the song and I wanted it to be free with no drums or beats. I think the words are so incredible and they really paint a picture of a scene that you can see in a movie. The arranger Steve Sidwell did an amazing job at really using the orchestration to bring out the words and the feelings of the song.

As a child of the 70s, I definitely appreciate that you also included a song from the Carpenters (“Solitaire”)! What drew you to this song from their discography? (It’s fairly well known but perhaps not one of their biggest hits…).

Thank you! This one is probably one of my favourites to sing on the album. The words really drew me into the song. I knew of someone in my life who had basically lived the words of the song, and so in that sense, the song means a lot to me. When we were coming up with how we wanted to orchestrate the song, I thought I would LOVE to try and use the same kind of ‘feeling’ that was used in the orchestra on Joni Mitchell’s ‘Both Sides Now’ from 2000. What she did with that song was BRILLIANT and is one of my all-time favourites.

You’ve had some pretty exceptional performing experiences – singing with the Canadian Tenors, appearing at the Olympics, touring with the Rankin Family. Are there one or two that especially stand out for you?

I would say singing at Carnegie Hall was one of the most awe inspiring experiences. I was so nervous it’s almost like a blur. But I have asked around and I was actually there singing…I just wish I could have enjoyed it more! 😉

What touring plans do you have for after the album comes out?

Once the Album drops on April 13th, we’re going to plan a few album release performances and hopefully a Canada wide tour in 2019.

Listen to “Priceless” on Spotify.