Just Words, the newest album from Lynne Hanson, is a multi coloured mirror of styles and genres, reflecting on love and a relentless passage of time. Eleven new songs paint a smoky portrait – a face in deep contemplation. “I spend my days pouring my life onto the pages, tales of lost love and ancient regret”, Hanson writes in  “Hemingway’s Songbird”. The pacing of the songs, in structure, tempo, and beat, unfold like restless footsteps, late night wanderings, through small city streets. What is never really made clear is whether the walking heads into or out of the stories that populate this fully realized, remarkable album. Hanson is transparent in her intent, she invites those who listen, to come along and share the sights, on a summer night with a moon high above and a new dawn soon to be rising.

half hour past when

the last bar empties and closes down

just the echo of my feet

rattling down the street

In “Long Way Home”, Lynne Hanson sings in a voice of knowing acceptance, that out of loss comes renewal, out of sorrow comes joy but it’s the time taken to look around that matters all the more. This song , in particular, is emblematic of how the album is constructed. The songs intertwine thematically and musically with each other. Each, a continuation of something earlier glimpsed or foreshadows what is yet to come. The experience and the joy of hearing this album is best savoured whole.

Presenting an album with this degree of artistry and attention, in the age of streaming singles, is a bold stroke for any writer but Hanson is in full artistic command of the tales she luxuriously interlaces through the telling. The words in these songs are chosen with delicate care and underscore a writer defining her craft.  As Hanson aptly points out in the title song, “Just Words”, “words they shake and shape you,… words they mould and make you”, but words that can hurt and harm, might also bring other understandings. In the current highly charged media world we find ourselves in, words are more often used like weapons but the poets and writers – central characters in many of these songs, use words for something more sublime. Yet like the plot in any great novel, it would be foolish to ruin the ending, therefore concentrating of a few of these wonderful songs might bring a future listener greater delight when they themselves bring this album into their own library.

Just Words was produced by Jim Bryson at Fixed Hinge Recording in Ottawa, and features guitar virtuoso Kevin Breit on electric guitar; it also features Prince Edward Island singer-songwriter Catherine MacLellan, who guests on four tracks. Bryson’s arrangements and subtle production bring effervescence to the songs, setting it apart from Hanson’s previous six albums. Following 2017’s excellent, Uneven Ground, and her collaboration with Lynne Mills in 2018, “Heartbreak Song For The Radio”, Hanson seems to be riding a creative high, allowing her to move effortlessly from deeply introspective to swampy line-dancing groove. Along with the release of Just Words, Hanson will also release a book of poetry, as a sort solo companion to the album. Poetry has been a goal of Lynne’s in recent years, as she has spoken publicly about her admiration and trepidation for the art form. In keeping with the lyrical skills displayed in her song writing, especially on this new album, it seems appropriate that she would branch out into fine literature. 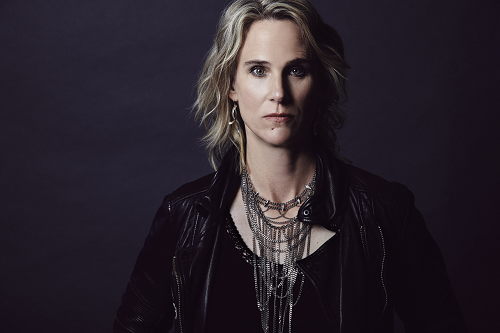 Every song is a gem of musical proficiency. Hanson’s vocals are accompanied by wide range instrumentation but the slide guitar work, presumably of Breit on electric guitar, is elegantly nuanced and swampy. Not only in the way it enhances the lyrics’ meaning, but also in setting the mood and landscape these songs inhabit. For without a doubt these are songs of a place and time, imagined or remembered.

While the whole album is a delight to listen to, some of the songs are stand alone hits and deserve attention not only for their intricate imagery but the striking melodies from which producer Jim Bryson extracts every drop of funky, dance all- night, colour and light. “Hearts Fade” is a slow burn of shimmering guitar, overlapped with a distorted electric crescendo. “I felt your heart fade, then I felt mine break… there’s no walking back across this tear stained ground”. Followed by the haunting, ghost talking, walking blues of “Long Way Home”, Hanson has every heart listening, deep in the palm of her hand and she’s going to take you there step by step. This song alone is worth the wait for Hanson’s fans. “I got sad songs on my mind, the broke down heartbreak kind… I’m taking the long way home” . Who has not lingered over a past love while our footfalls draw us ever onward?  There’s no looking back but we surely can peak over our shoulder a time or two. This is an outstanding song that will become a much-loved standard in her repertoire. Already, live audiences are getting a sense of how compelling these classic songs are.

“Higher Ground”, a sultry soul blues march that will leave every seat empty while all join in on the dance. This song, smooth as barrel-aged whiskey and steeped in gospel preaching wisdom, is meant to take you exactly to the compass bearing that Hanson points to. “well I felt pure joy, felt nothing but pain, seen the silver lining felt it rain and rain, what I learned you wanna get to heaven, gotta take the higher ground”.

“I cried on a lot of shoulders, stayed quiet when I could have been bolder, I been running scared most of the time”, sings Hanson with authority, vulnerable yet empowered, in “Clean Slate”, the song in which Hanson the writer, points to possibilities that come only when forgiveness, acknowledgment and heartbreak are seen for what they really are  – in every beginning is an ending but so too in every ending is a new beginning.

Just Words is some of the best Canadian music has on offer or any music for that matter. From the song writing through to the inspired playing to the gorgeous production, this is an album to cherish and treasure and merits listening to over and over and over again.

As Lynne Hanson so adeptly points out:

“do you remember I gave you a box

that box had just a single key

you promised to hold it close to your heart

cause that box held all of me” (Hearts Fade)

Douglas McLean fell in love with music at a very early age and has worked as a musician and songwriter since his early teens. He has a deep love for the written word and has spent his life in pursuit of language as a means to convey what Van Morrison once called “the inarticulate speech of the heart”. He lives deep in the Almaguin Highlands with his wife and their dog. Douglas is active in local radio, recording, producing and writing, in and around Huntsville, Ontario.