Toronto-based alt-country/Americana artist Meredith Lazowski shares her highly anticipated debut album, “Other Way Home,” released just a week ago.  Produced by talented Juno award-winner Justin Rutledge (who is also a GDW favorite), the collection of songs written by Meredith represent an accumulation covering the last 15 years of her chosen career. Her voice, so sweet and welcoming, takes us on a personal journey from prairies to graveyards, with a touch of love.

The album starts with Meredith’s previously released debut single, “Prairie,” which was featured on GDW this past March. I have to agree with Martin on his glowing review – this emerging artist is indeed “stunning.” Her slow, methodical approach to each tune drew me into her story, like the ocean tide calls a sailor out to sea.

Skip down a few tracks to “The Other Side,” and you’ll be pleasantly surprised with a more upbeat rock tune that demonstrates Meredith’s diversity in energy and delivery. Delve in a little deeper, and you’ll come to my favorite track on the album, “Running Circles,” which is, on the surface, a sweet tune of being swept up by an object of affection. But listen closely and you’ll hear the unfortunate truth of how these romances often prove to be one-sided: “We got closer every day / Wouldn’t have it any other way / We got lost in the time / But you were always there by my side … / I know that I’m hopeless / You know I’ll be fine / But you’re running circles / In my mind.”

Meredith announced a soulful return to her creative roots with this album. “It has always been a dream of mine to gather together all of these songs and take them to a new level in a studio,” she shares. “For me, this has been an artistic hope realized.” In “No Reason,” she sings, “I’m tired of looking back at the things I haven’t done / The timing is now / Got to get it done.” Her labor of love shines throughout this album and proves to be a fabulous reflection of her heart and mind. I’d be willing to wager that while this might be her first album, we have yet to hear the last from Meredith. 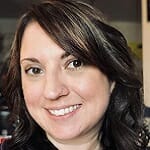 Jess has always enjoyed a wide range of music genres and eras. Connecting deeply with classical music, she played cello from grade school through high school, and although no longer actively playing, her affinity for finding an emotional connection to music is still strong. Residing in central PA, she is new to the Canadian music scene and enjoys listening to new artists as a way to break away from “the usual.” Jess is an avid yogi who often finds a sliver of peace while on the yoga mat with good music playing in the background.

Tags from the story
Meredith Lazowski
Facebook Twitter Pinterest
LinkedIn Email
0 replies on “Review: Meredith Lazowski, “Other Way Home””
The same snow is falling
On the deep silent water
The great dark wonder
Into the waves of my heart...
~ Blue Rodeo