With the recent release of “Wander Wonder,” the Allison Au Quartet adds to an already distinguished discography that includes their Juno-nominated 2013 debut album “The Sky Was Pale Blue, then Grey” and the 2016 Juno-winning project “Forest Grove.”

Formed in 2009, the Allison Au Quartet (comprised of Allison Au on alto saxophone, Todd Pentney on piano and Prophet Rev2, Jon Maharaj on bass and electric bass, and Fabio Ragnelli on drums) has toured extensively in Canada and the US. The group was awarded the TD Jazz Fellowship Scholarship (2011), The Alfred and Phyllis Balm Scholarship (2012), and The Margareta and Benno Nigg Scholarship (2013) for three consecutive artist residencies at the Banff Centre.

We recently chatted with Allison about the new album.

It’s been two years since your last release, “Forest Grove” (for which you won a Juno) – did you approach this project any differently than your previous work? If so, how?

After the band finished “Forest Grove” I really felt that I hit a wall with my writing. I wanted to find a way to stretch my horizons and challenge myself in a compositional context. Though I write all of my music at the piano, my piano playing capabilities are pretty limited; I can play functional chords, but it’s not great by any means. I had been discussing this with my bandmate/pianist, Todd Pentney, one day, and he suggested I take a few lessons with Toronto based pianist and teacher named Frank Falco, simply to learn more about the piano.

Since studying with Frank, though, I’ve learned so much more. We’ve talked a lot about piano voicing from a piano player’s perspective, which has tremendously informed my writing. Frank has also spent many lessons discussing harmony and compositional techniques. It’s been an incredibly inspiring period of learning for me.

Not surprisingly, much of the music featured on “Wander Wonder” is inspired by my lessons with Frank. Many of the songs were a direct result of piano techniques or compositional ideas I have been working on in my lessons.

In an interview you did with the Ottawa Citizen back in 2016, you mentioned that, at the time, you were taking lessons to work on technique, artistry, and the like. I think so many people think of professional musicians as masters of their craft (which you are!) and don’t stop to consider that maybe musicians want or need professional development, just as in other careers. Are you still studying with a teacher regularly? Where do you feel these lessons have taken you, especially since the last album?

I don’t think I’ll ever feel like I have mastered anything in my pursuit of music. To me, it is very much “the more you know, the more you don’t know.”This can seem overwhelming to some, but I think that is what makes it an inspiring creative endeavour.

Taking lessons is such a personal thing. Everyone learns differently. So many of my friends and colleagues don’t find they need to take a formal lesson, as they’re constantly checking out so many things on their own already. I do my best to do that too; I try to check out as much new music as I can and research ideas that intrigue me. But as the pursuit for me at the moment is piano, I’ve found it invaluable to have a one-on-one session with a teacher.

I’ve been enjoying continuing my studies with Frank Falco and grateful to have some time check out new ideas with the guidance of a great mentor.

Regular lessons for me, in a way, have helped put me back in the mentality of a student. Lessons have encouraged me to constantly question concepts and reminded me to be open to anything and everything in the learning process. It’s really important to me to continue to cultivate a sense of child like exploration.

The opening track, “The Valley,” is a really (to me, anyway) abstract piece – when you were deciding on how to organize the album, what spoke to you about this track and said, “This should open the album”?

I think a lot about colour and colour palettes when I compose. The Valley is a composition that is an exploration in colour shifts and gradients.

As well, when the band performs this piece live, as an acoustic quartet, it is especially collaborative. The entire piece is performed rubato (with disregard to a strict, constant tempo). The overall effect is that a lot of space is created around the melody so that everyone can improvise collectively and collaboratively.

It wasn’t until we went into the studio that we decided to experiment more with synths and more electronic textures.

As I was choosing the song order for the album, it seemed to me a logical choice to have “The Valley” as the opening track. It serves as a sort of “amuse-bouche” for the album. It’s totally different from everything else on “Wander Wonder,” but to me it represents a different rendition of the collective voice of the band.

One of the tunes to which I’m most drawn is “Morning” – as a classical musician, the title immediately brings Grieg’s famous piece to mind, and this track evokes some of that same atmosphere. Morning also seems like a time when one’s thoughts can more easily “wander wonder,” to pull from your album title – what do you find particularly inspirational about morning?

Nothing! Haha. I’m actually terrible at getting up early. As a freelance musician, I often work late nights and don’t always have a chance to experience standard morning hours. That said, I was inspired to write this piece after having to wake up particularly early to take a business call with a friend overseas. We had to account for a time change, so the only time to chat was an early morning hour.

On concluding the phone call, I realized how quiet everything in the house was. And the bass line for this piece came quite clearly to me.

“Morning” is about the silence I so desperately and frequently need to write. It is about the quiet and calm of space to think.

I’m constantly amazed by the amount of collaboration and interconnection amongst jazz musicians in the Toronto area! Clearly you work with some tremendous musicians in the quartet, but are there other musicians with whom you’d like to work at some point but just haven’t yet had the opportunity?

Of course! Toronto certainly has an abundance of incredible musicians. The Jazz community in Toronto is small, but there are still lots of musicians with whom I haven’t had a chance to work.

I’d love to collaborate more with some of the veteran musicians in this city, simply because I don’t have a chance to as frequently as I’d like. Though I’ve played with them before, musicians like guitarist Reg Schwager and bassist Neil Swainson are just two examples of such
musicians who obtain such a depth of understanding of music and are a joy to play with. In the few times I’ve played with them, I am so inspired to keep exploring in music.

Turning that topic on its head a bit: we’ve previously talked with other female jazz musicians about the unique difficulties encountered in your profession – for example, the lack of equal representation in festival lineups, the fact that women as bandleaders still seems to be a new concept to some. Have you found your path as a musician to be more difficult than your male counterparts have experienced?

No, I am fortunate to say that I have been very lucky and don’t feel like my path has been any more difficult than my male colleagues. Pursuing a career in music is hard period, not to mention pursuing a career as a Jazz musician, specifically.

I think being a woman has it’s challenges at times, but I would call them minor, and they haven’t overall affected the opportunities I’ve had.

If anything, I feel very fortunate to be able to do what I do at this time in history. Fifty years ago, I can’t say I would have the same kind of support or mentorship that I have been lucky to receive since embarking on this path.

That said, there is a lot of room for growth. There is always room to do better. I acknowledge the very valuable social conversation that is happening now. I know many of my female peers may have faced various obstacles that have affected certain aspects of their careers and what they do. The frank conversations that are happening now have to happen and they have to happen more frequently.

I am just lucky I haven’t personally experienced too many negative obstacles myself.

I do care very much about equal representation, however, not just of women, but of musicians of other walks of life, ethnicities and cultures. I hope to see greater diversity in not only the groups of performing musicians in Jazz in Canada, but also amongst the individuals involved in administrative positions in the presentation of Jazz. Too often, those positions are all held by men of a certain age and socio-cultural demographic and that has to change. Diverse representation and fresh perspectives in all arenas of music presentation benefit everyone involved. 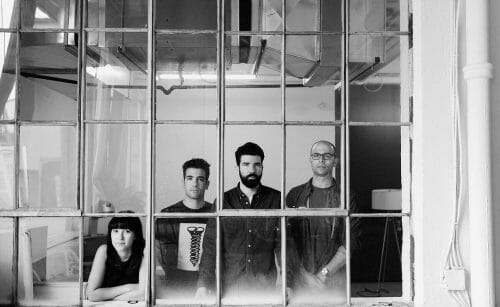 You have several shows lined up over the next several months in the Toronto area (with one excursion to Niagara-on-the-Lake!) – are there any plans to tour in other parts of Canada or (dare I hope?) the US?

Nothing to announce at the moment, but I am currently booking dates for the band for the coming year. As an independent musician (independent of a manager, that is), it’s a constant balancing act of the creative and business sides of music. I’m thinking about composing and practicing just as much as I am about the emails I have to write and respond to on a daily basis. Though it can be stressful at times, it is incredibly rewarding to have control over the choices I make artistically.

The band has been fortunate to have toured the US twice in the past two years. We hope to return in the near future!