Sometimes here at Team GDW, we’re a bit slow to pick up on great music that we should have heard ages ago.  “Driftin’ Heart,” the latest album from Jason Buie (released in May), is one such project.  This great blues album is not only exceptionally well crafted but also terrific fun to crank up on the car stereo.  (As I’ve done on a few commutes recently.)

Jason, who is based in Vancouver, has been a mainstay on the blues scene for over 15 years now, touring across Canada, Europe, the US, and Japan.  He has also supported his local musical community in other ways, including co-founding and serving as the Artistic Director for the White Rock Blue Society, and starting a “Blues in the School” program in Vancouver.

“Driftin’ Heart” kicks off with a bang with “Fool From the Start,” and keeps up the wicked pace with “House Party” (Jason’s guitar work is terrific throughout but listen for the solo in this one).  One of my favorite tunes, though, is definitely “Government Man,” with its wry take on less than favorable experiences with public servants.  Other highlights include the title track with its touch of country, “Stay the Night” (which reminds me of some of the great music out of the 1950s), and the driving “Last Love Affair.”

If you’ve ever listened to an album in the car and thought about rolling down the windows so other people can hear it, you’ll get a sense of how I’ve enjoyed this album.  I would encourage you to pick it up, pop it in your car, crank it up, and share it with others.

We’re delighted that Jason took some time to answer some questions about the album.

“Driftin’ Heart” is your third album – when you started working on it, did you have a specific sound or goal in mind for it? How close do you feel you got to what you envisioned at the beginning?

I wanted to make a straight up blues record incorporating all my influences in a respectful way. I’m happy with the way it turned out, it was pretty close to exactly what I envisioned.

One of my favorite songs from the album has to be “Government Man.” From this side of the border, your government men (at least the ones at the top) seem preferable to ours… but frustration with government is universal, I guess?  Was there something specific that inspired you to write this, or several things that just sort of boiled over?

This is kind of a song of the times….on both sides of the border. One day I was trying to get thru on the phone to talk to some one regarding my tax return hence the line “ I need to talk to one of you.” Teleprompts kept coming up and it seemed impossible to actually speak with someone. I had a Howling Wolf record playing in the back ground as I sat noodling with my guitar. My co-writer drummer had already penned a few verses and had the idea of a song called Government Man….it just all came together from there. 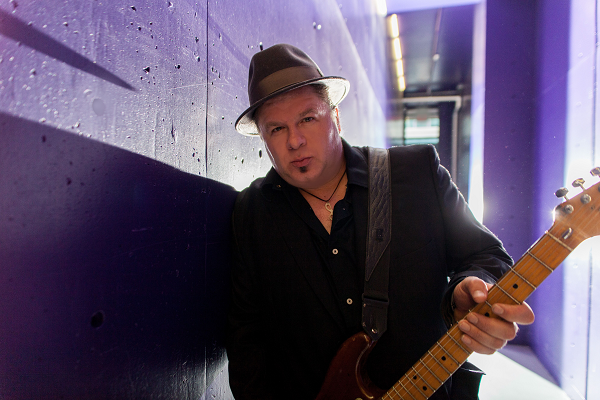 For those of us who aren’t familiar with Vancouver’s music scene, would you describe it as a pretty vibrant one, particularly for blues artists?

Unfortunately the Vancouver Blues music scene has become very dismantled over the years since The Yale shut down. There really is no hub anymore in town for the “Scene” to take place. Everyone is still out there playing and keeping the blues alive as the clubs come and go but there really is no home base any more.

I know you’ve opened for some really noteworthy musicians (Taj Mahal, Robert Cray, Jeff Healey, just to name a few) – who are some of the blues musicians who have most inspired you as you’ve found your own path in music?

Actually Jeff Healey has always been a huge inspiration to me, I still listen to him daily/weekly. He inspires me on many different levels. I also love Freddie King, Albert and B.B (King) along with Albert Collins and Buddy Guy. I’m also a big fan of Doyle Bramhall II and Ian Moore.

Your kids feature prominently on your Facebook page (and they look like great kids!) – how do you balance the various parts of your life, musical and personal? And do they enjoy blues music?

The kids are great and it is quite the juggling act. I have 10 yr old twins Jackson & Etta. I ended up getting full custody of them back in 2011. The mother is completely out of the picture. At the time I was living in White Rock (south of Vancouver). When I got full custody I had to move back to Victoria on the Island as that is where all my family is. My parents and my Aunt have been a huge support in helping me raise them. I use to go out on the road for 4 to 6 weeks at a time. Needless to say I have not been able to do any long excursions the last few years….the most I go out for now is 10 or 12 days at a time. I’ll fly out to Calgary use a pick up band and do The Blues Can and then up to Edmonton to Blues on Whyte for a week. Fly home Sunday night then up Monday morning at 7am making lunches, going to hockey, swimming, bedtime stories, etc. And yes, the kids love the Blues. My daughter’s favourite song at the moment is “I’d rather go blind” by Etta James.

You have some live dates coming up in October in Alberta – any other gigs coming up that you can share?  Any chance you’re coming to this side of North America?

I’ll be posting the fall batch of dates coming up soon. I do plan on coming out to Ontario and Quebec in the new year, I would really like to get on some of the festivals out that way next summer I’ve started writing for the next record….I have lots of dreams and goals to execute so I’ll be out there chippin’ away! Would love to come play across the border more.