Very few sounds can attract my attention more quickly than well-played piano.  “Got a Light?,” released by the Jeremy Ledbetter Trio in July, features not only the stellar piano chops of Toronto-based pianist and arranger Jeremy Ledbetter, but also the virtuosic contributions of bassist Rich Brown and drummer/percussionist Larnell Lewis.

One can hear a variety of influences here, including Latin music (notably in the guest appearances of Venezuelan musician Eliana Cuevas and percussionist Reimundo Sosa on Afro-Cuban drums) and even rock music in the form of a cover of The Tragically Hip’s “Gift Shop,” recorded just a week after Gord Downie’s death.  The album is a high-energy ride (check out “About Climbing Mountains” for a great example) but surprisingly closes with “The Tightrope Walker,” a delicate, slow-tempo ballad.

This project is not only a great listen but also intellectually engaging in the way that Ledbetter and his colleagues shake up not only the influences but also the rhythms and sounds; I hope this particular configuration of musicians continues as it will be intriguing to hear where they go next.

We’re so pleased that Jeremy Ledbetter took the time to talk with us about the project.

Your music is deeply influenced by a number of different musical styles – Caribbean and Brazilian, just to name two. How did you become interested in world music (starting as you did as a classical pianist) and how do you see the fusion between it and jazz?

First I got hooked on travelling – I left Canada and started wandering around the world, and was instantly hooked.  After a while I realized that I was making all my decisions about where to go based on music, so I just embraced that and kept bouncing around from one musical place to another for about a decade.

As for the fusion thing, I don’t really see it as a fusion, mainly because I don’t think jazz has a sound of its own anymore….and lots of people would certainly argue that, but for me “jazz” just means pushing the limits of whatever music you’re working in – harmonically, rhythmically, and placing a high value on virtuosity and improvisation.  So I would argue that jazz is an aesthetic or an approach rather than a concrete sound….and that’s why any music on Earth can be made into “jazz.”

In the album description online, you said of the project, “This album is about painting pictures and creating a cinematic atmosphere.” What is the story – or the movie – you hope your listeners see and feel as they listen through the album?

For me the album is not just one story, although certainly one could always hear it that way, and it would be up to them to tell me what the story is that they’re hearing.  But as for the intention behind the pieces, each piece is telling its own story…so more like a collection of short stories than one over-arching storyline.  “Suspirito” is an attempt to envision the sound of an infant’s dream, “The Tightrope Walker” is about a person walking a high wire, “About Climbing Mountains” is about . . . well, that one’s pretty self-explanatory. 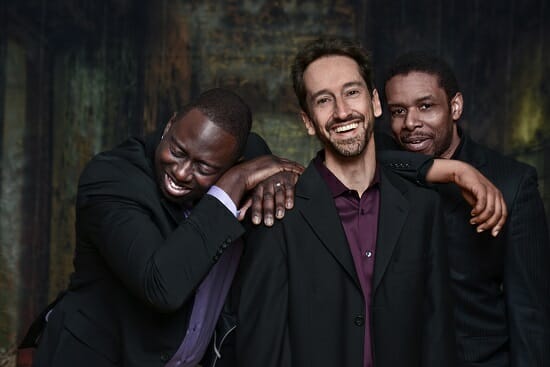 I’ve listened to the album several times now and I’ve been intrigued each time by what seem to me to be somewhat complex rhythms… much more complex and interesting than the standard 4/4 or 6/8. Are you drawn to more intricate rhythm in your writing or is that an outgrowth of the world music influences on your compositions?

That goes back to my answer to your first question – it’s not coming from the world music influences but from the impulse to push the boundaries of the music rhythmically.  What makes it more noticeable perhaps is the fact that, due to the world music influences, the rhythms are very prominent, and are voiced fully rather than “felt” or “implied”, and are laid out so that they can be heard quite clearly.

The trio also features Larnell Lewis and Rich Brown – is this a relatively new collaboration or have you worked together previous to forming the trio? What do they bring to your music that is uniquely theirs?

We have worked together for years with various other projects but never as a trio, so this particular group is brand new, but was something I had in mind for years, knowing that it would be really great.

You recorded a cover of “Gift Shop” for the album as a tribute to Gord Downie – how was his music (and that of the Hip) meaningful for you in your own career as a musician?

Not in my career as a musician, but in my childhood and teenage years growing up in Kitchener Ontario.  The Tragically Hip were the soundtrack of our lives, and a huge source of our pride in being Canadian.  So for me the Hip is . . . the sound of my youth, and of my country.  So pretty important!