After nearly twenty years with the Vancouver band Mud Dog, blues guitarist and educator Steve Sainas has stepped out into a solo career with his latest release, “Simple as This.”  This reflective project is a wonderful collection of songs about simplicity, the need to live in harmony in others, and rising above the dissonance in daily life to make a better world for this.

The opening (and title) track finds Steve musing on the joy he’s discovered in the simple pleasures of life – for example, loved ones, nature.  This sets the theme for the entire album, leading into songs such as “Got Your Love” (a toe-tapping acoustic blues piece with terrific guitar playing) and “Ruby Jo,” a memorial to a departed friend that is also a wonderful exhortation to live stronger and better.

Two of my favorite songs on the record follow: “Why Do We Fall” with its slow rock ballad tempo and on-point examination of the things in life that cause us to stumble, and “Cities on Fire,” a particularly timely meditation on the dangers of power and corruption.

“Simple as This” is one of those rare and enjoyable albums that combines deep introspection with terrific melodies and playing.  Even if your musical tastes run to roots music rather than blues, I encourage you to give this album a listen, as it blurs the line between the two genres effortlessly and is a great choice for fans of both.

We’re thrilled that Steve took the time to answer a few questions about his new album.

What inspired you to release a solo album at this point in your career, after working with Mud Dog for nearly twenty years?

First of all Lesley, thank you for this interview! Initially, the inspiration to go solo acoustic came out of necessity. I made the decision to retire my band, Mud Dog, a few years ago because many of the live venues in the Greater Vancouver Region that supported paid gigs for bands either shut down, stopped supporting live music, or stopped supporting bands with fair pay. It became nearly impossible to find enough fair paying work to keep the band, or even a duo together.

Therefore, three years ago, I revised my live performance into a solo acoustic act that presents a broad repertoire covering blues, classic rock, roots and traditional country music. I also perform my original contemporary roots songs that draw inspiration from all of these genres of music. Performing as a solo acoustic act, I am able to perform several days a week with a lot of freedom to spontaneously perform whatever I want without the need to arrange rehearsals or try to schedule bookings with other musicians. I have also enjoyed the challenge of taking my musicianship to a higher level in that I now have to carry the entire show on my own without any support from a great band or sideman.

Not much has changed in the way that I write because I always wrote all of the songs for Mud Dog on my own before presenting them to the band much like I wrote all the songs for this album before presenting them to my amazing session musicians, drummer, Kelly Stodola and bassist, Chad Matthews.  The only difference is that on this album, I stretched beyond traditional blues. I wanted to utilize more facets of my musical influences, and I also wanted to place a greater emphasis on the lyrics by stripping down the instrumentation to create more space for my vocals. In these songs, I wanted to reflect upon the challenges that our society faces today, both personally and globally. My goal was to develop a thematic album that suggests to listeners that we have the power to affect positive change if we all do our part to work together towards a common goal of social responsibility. Because I have a history of being outspoken on issues of social justice as an educator and as a community leader, I felt the best way to achieve this artistic goal is to move forward as a solo artist under my own name.

In addition to your work as a recording artist, you’re also a music teacher (and were, in fact, the 2015 MusiCounts Teacher of the Year). How does each part of your work as a musician inform the other?

As a music teacher, I draw heavily from my professional experience as a recording artist and a performer. The curriculum that I developed for my Terry Fox Rock School and Recording Arts high school music program is based on all the elements that we use as professional musicians to develop our musicianship and prepare for a gig whether it is on a stage or in a recording studio.  Each new skill that I learn with each performance or recording finds its way into my classroom to enhance my students’ music education.

Similarly, I learn from my students on a daily basis as they introduce me to the latest music that they are listening to, and the latest techniques that they learn from the vast online resources at their disposal. Also, my students’ daily energy and enthusiasm for music inspires me to keep striving to perform, record, and become a better musician, and I believe that my students are encouraged to pursue careers in music as they are more closely connected to the music industry through my professional experiences and network of music industry friends. My music classroom is an inspiring creative environment for all of us. 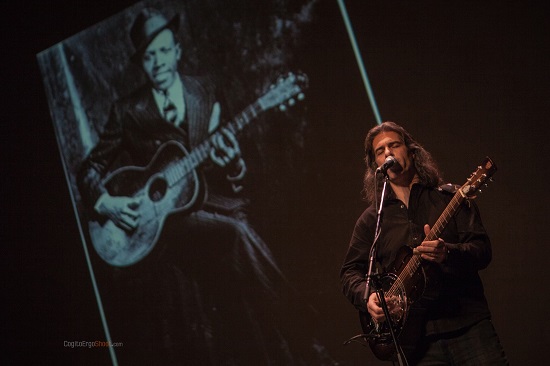 As a music teacher, and someone who’s helped a lot of young people get started as musicians, are there any particular words of wisdom you would pass on to someone thinking about becoming a professional musician?

In my classes, I emphasize that it is very difficult to make a sustainable living from today’s music industry as revenue streams from recorded music have been greatly diminished due to online piracy and unfair streaming rates for artists. Also, live gigs that pay well are harder to find these days. Therefore, musicians need to be absolutely passionate about performing and recording. Create and play music because you love it, but also don’t give away your performances and recordings for less than they are worth. The current trend to share your music for free, or to perform for exposure has devalued music to the point that most musicians can no longer draw a living wage from their music. It is also important to master as many aspects of the music business as possible, so that you can draw on enough revenue streams to make a living from your art. If you can do most aspects of your recording and performance needs yourself, you can reduce your overhead costs to allow your act to remain financially viable. Finally, strongly believe in yourself, work as hard as you can, and never give up!

Is “Ruby Jo” about one specific person or an amalgamation of people you’ve known?

Ruby Jo was written for my dear departed friend Ruby Joanne Olson. I first met her and her husband, Dan (aka Stan), when I attended the open mic stage at their venue The Olson Playhouse Café in Maple Ridge, BC.  We immediately became good friends and they strongly supported my music by regularly hiring me to perform for their events. Jo was a strong Human Rights Activist. For years she worked in her hometown Winnipeg as a Trade Union Activist and then moved to Ottawa to work as an Executive Assistant to the NDP MP for Thompson, Manitoba. She was always trying to improve living conditions for people.

When she moved to the West Coast, she and Dan opened their music venue to support the local art community, and Jo also took over the management of the Friends in Need Food Bank that was experiencing serious financial trouble. Through tireless work and skilled networking, she rebuilt the food bank into a thriving community charity. Even while going through chemo as she courageously fought cancer, she continued to manage the food bank from home, and at the office during the evenings on her own in order to not compromise her weakened immune system. After our final hospital visit during Jo’s final days, her husband commented to me: “I can hardly wait to hear the song that you write for her.” I wrote Ruby Jo the next day and sent a rough recording to the family in time for Jo to hear it… I’m told she reacted with a smile.

The message in “Why Do We Fall” is so timely, I think, in this age of instant gratification and accumulation: “Why do we fall… because we want it all, without end.” Are there some particular events or experiences that have inspired your thoughts on this topic?

Good question… where do I begin? All around I see people in our first world society obsessed with consumerism and the pursuit of wealth that often comes at the expense of their health. Rarely do these materialistic people ever attain true happiness. Further, many in our society place the economy above all else: The environment, public education, healthcare, and human rights all take a back seat to the economy. We know that fossil fuel extraction and the use of fossil fuel energy is killing our planet; yet, the well being of the economy trumps saving the environment. Many right wing politicians continue to deny that global warming is real as they continue to fund the development of fossil fuel projects instead of diverting this funding to the much needed accelerated development of sustainable green energy that is immediately essential to saving our planet.

“Why Do We Fall” expresses my frustration that most of our society is content to apathetically maintain the status quo as we ignore the irrefutable fact that we are killing our planet. Instead of becoming politically active and forcing leaders to go green, many of us spend our days accumulating as much material wealth as we can, and avoid the tough issues by distracting ourselves with escapist entertainment. Sorry… you asked… end of rant.

I plan to continue performing every week at as many local shows as possible during the school months, and hopefully go on the road in the summer to perform at some festivals. If any festival promoters are reading this, I’d love to perform at your event.  In addition, I’m working towards putting the trio on stage in the near future to present this album live in its entirety. I’m also hoping to get a performance spot during the Vancouver Juno Fest in March. My performance calendar can be viewed on my website www.stevesainas.ca where you can also find a link to download my music.

Buy “Simple as This” on CDBaby.