The Saskatchewan-based Celtic group West of Mabou first came to our attention shortly after their self-titled debut was released – a deft, delightful set of tunes that clearly signified a bright future ahead.  With their newest album, “The Bridge,” the band has taken a firm step forward, delivering a sprightly sound that combines their youthful and contagious enthusiasm in tandem with new self-assurance and confidence.

The project opens with “The Eagle’s Whistle,” a set of three tunes that features Alex Rasmussen’s pipes right out of the gate (picking up where the previous album left off), followed by the skillful fiddles of Scott Benson and Roberta Wallace.  “September” follows with its lilting tune, while “The First Pint” begins with some terrific fretwork from Justin Easton (named in part, appropriately enough, “Justin’s Jig”), and “Caoimhín’s Jigs” and “The Piper’s Despair” provide haunting midsections to the album.

As a pianist myself, I must admit partiality to “Lime Hill,” which features Wendy MacIsaac on piano – a perfect complement to West of Mabou’s sound, adding that extra percussive salt in tandem with Jared Dormer’s always superb drumming.  “Dancing Feet,” with guest stepdancer Annette Summerfield, highlights not only the percussive capacity of stepdancing but also some first-rate bodhran playing, before Alex’s pipes launch in all their glory.  Carrying on a terrific theme from their first album, this project also closes with a piece featuring pipes, “Moving Cloud,” an uptempo finish for an excellent project.

One often reads about the dangers of “sophomore slump” for artists releasing their second albums – no danger of that here.  “The Bridge” is a superb album and a worthy successor to the band’s debut, not to mention additional confirmation that this is a group of truly gifted musicians who are doing something very special here.  We cannot wait to hear this new material live and, speaking from personal experience, we know that the live versions will be tremendous.  Highly recommended.

Thanks to Scott Benson for giving us some time to talk about the new album.

Going into the studio for this second album, what were you hoping to accomplish? And do you feel that you did?

We made our first record only four months into becoming a band, and it was essentially recorded live off the floor in a single room. In the year that followed, we got to know each other personally and musically, toured extensively, and came into our own as a band. We went into the formation of our second album with the renewed energy to create something fresh, and worked hard to craft original arrangements and write original tunes. We were fortunate to have Wendy MacIsaac produce this recording, which helped take our work to the next level.

I would imagine that there is a tremendous range of repertoire to explore as a band, even without writing your own material – how do you continue to keep things fresh for yourselves as a group?

The benefit of having a large group with five multi-instrumentalists is that we can experiment quite a bit with different sounds and arrangements, and we’re able to feature different instruments. Each of the members in West of Mabou has a pretty extensive solo background. For instance, Alex, our piper, has a lot of experience in pipe bands and has competed in the World Pipe Band Championships in Scotland. Those solo backgrounds mean we’ve played and been exposed to a lot of unique tunes. Each of us is able to bring those tunes to West of Mabou and put our stamp on them as a band.

Since you released your first album, you’ve had the opportunity to tour quite a bit (hopefully to at least a few places you’d never been as a band) – what is the best tour experience as a band so far?

It was amazing to see Great Dark Wonder at our shows in Pennsylvania! (Ed. note: Aw shucks…) Getting the opportunity to play at Celtic Classic was definitely a highlight for us, but we’ve had some really great trips in Western Canada as well. 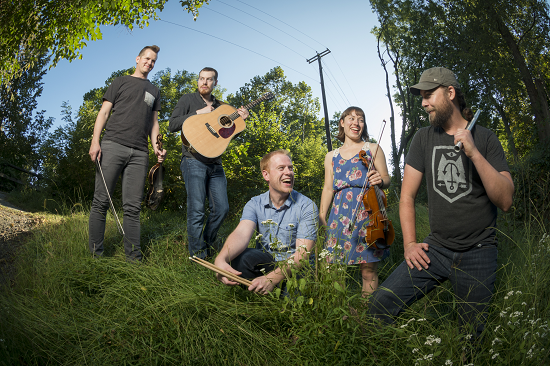 I’m not sure I’ve ever had the chance to ask you this before – what drew you all to this genre of music in particular?

Roberta and I both come from classical backgrounds, and we attended fiddle camps as kids where we were exposed to different fiddle styles. Justin and Roberta met at a Saskatchewan fiddle camp when they were in high school, and they have been playing together ever since. Alex grew up playing in pipe bands and he has performed and competed extensively as a soloist as well. I had played in a couple other bands with Jared, so I asked him to come on board when we were looking for a percussionist.

I don’t have liner notes in front of me – on “Lime Hill” (which I love, love, love) is Wendy MacIsaac playing fiddle or piano? How did this collaboration come about?

Yes, it is *the* Wendy MacIsaac, master Cape Breton fiddler! She is an incredible fiddler, dancer, and piano player. It was great having her mix of talents in the studio, as she was able to provide guidance on musical features such as tempos, chords, and fiddle parts. We were thrilled when she offered to lay down some Cape Breton piano on “Lime Hill”!

What track on the new album was the most challenging to play/put together as a group?

The Piper’s Despair was particularly challenging in terms of tempo and timing. There’s a time signature change from 6/8 to 4/4 that was tricky, and it took some work to maintain the same tempo during that transition. We recorded “The Bridge” mostly live, isolated in separate rooms. Alex, Roberta, and I were even in a separate building. We’re a live band and we’re used to getting visual cues off each other, so it was different for us being separated from one another like that.

Are there particular musicians or bands who have inspired you all on your own path as musicians? (Any recommendations for people who hopefully will hear and love your albums, and want to hear more music like it?)

Breabach (Scotland), Còig (Cape Breton), and Beòlach (Wendy’s band) are just a few of the artists that continue to inspire us. I also really love The Gloaming (Ireland). The track entitled “Caoimhín’s Jigs” is actually three jigs I learned from Caoimhín Ó Raghallaigh, who plays fiddle in “The Gloaming.”

What touring plans do you have for this year?

We are planning to travel east again this summer, right now heading as far as Ontario. If you can make it up to Canada, we’d love to see GDW in the crowd!

Listen to “The Bridge” on Spotify.